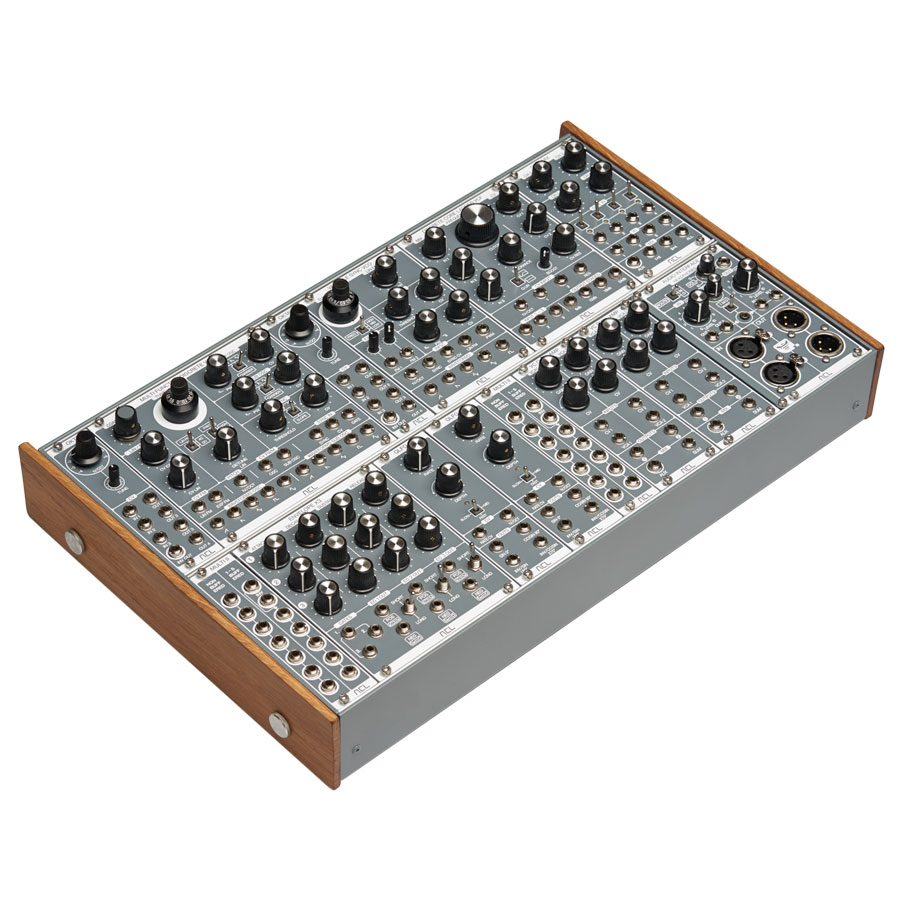 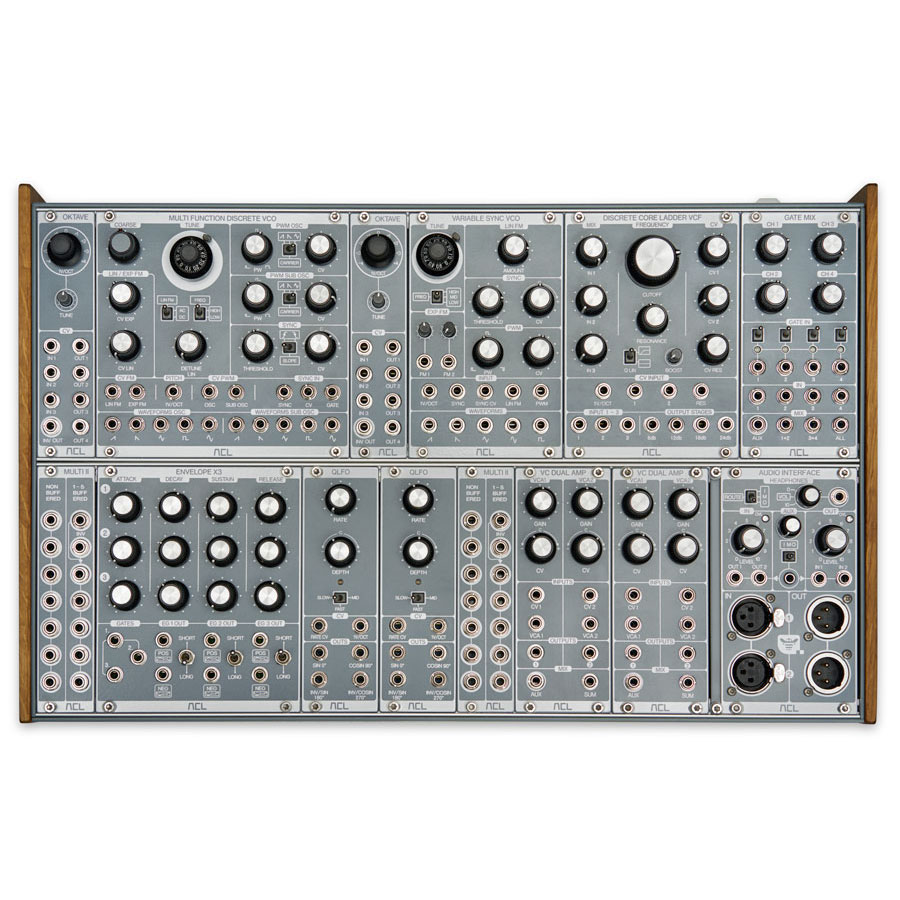 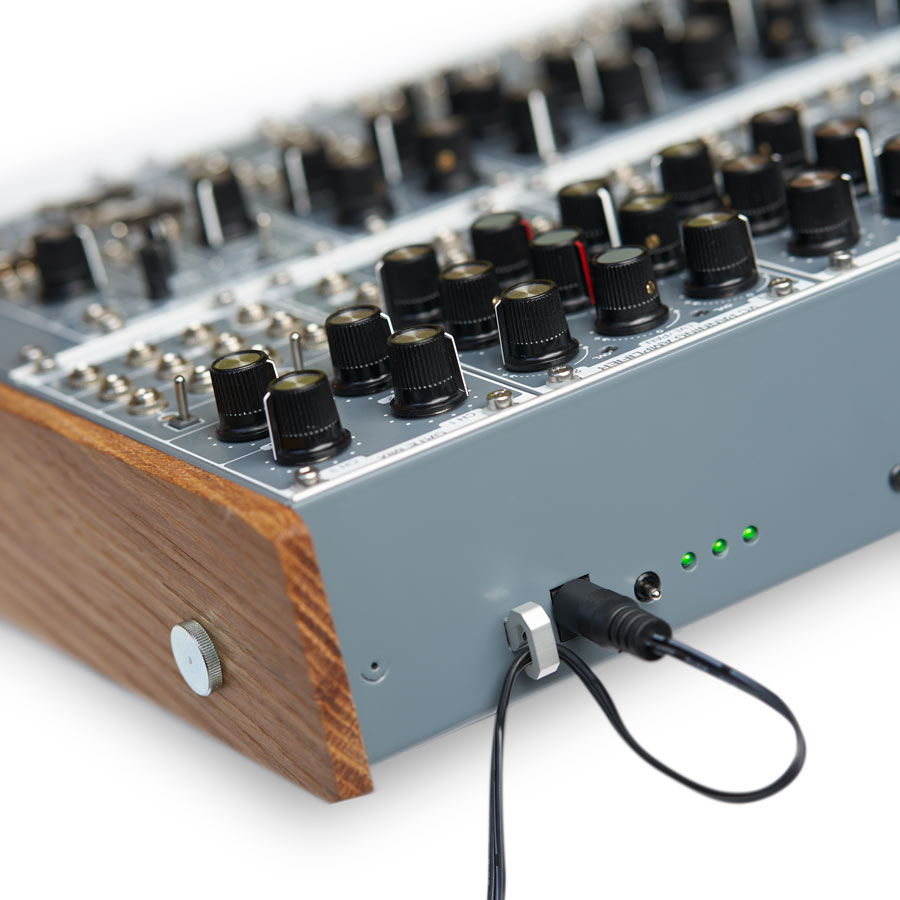 System 2 is our second complete system, offering a creamy-sounding, creative take
on classic subtractive synthesis. Its ideal for powerful and creative bass and leads,
with unrivalled sound quality. Plus a number of ACL-only tricks up its sleeve.

Honestly, we weren′t sure we′d get as far as System 2 calling the first ‘System 1’ was a bit of a leap of faith! After all, a key point of modular is that you can mix and match components. But we realised lots of users were grouping our modules together in their racks anyway. Not only that, but many had run out of space in their main rack and still wanted to add some ACL kit. And then there were the people who wanted a complete, portable live-friendly system for gigs. So we gave it a shot it′s all modular, after all so you can still connect it however you like – and it worked!


So why this configuration? Following the success of System 1, we received many requests for a more conventional subtractive synth design (1 had a heavy focus on creative stereo sound). So the focus is on creating powerful bass and leads, with plenty of modulation options, whilst still allowing scope for experimentation, and harnessing the unrivalled power and sound quality that make our individual modules so popular. The result has some very distinct specialities and the unmistakable flavour of our modules, and is designed to slot easily into a bigger set-up too. Let′s have a walk through those modules…

The main sound sources come courtesy of a Multifunction Discrete VCO. This module ignores traditional designs, offering a unique and powerful sound, plus ACL-specific innovations such as multi-waveform-type sub-oscillators. These latter are modulatable and fully-syncable to the main oscillator. In fact you can even mix and match between five types of each. Having two of these allows super-phat, layered sounds, or fantastic stereo or detuned voices. Not only that, but the linear detune feature allows unique beating effects, the timing of which remain unchanged from the lowest note to the highest, rather than speeding up and slowing down proportionately to the pitch..

Reinforcing the VCO (and adding a host of additional creative possibilities) is a Variable Sync VCO. This is a precise, excellent sounding VCO, providing five simultaneous waveforms, a VC variable-sync feature (that works brilliantly with the main VCO), exceptionally powerful linear FM (you need to hear what this can do to liven up System 2 bass patches to believe it), and loads more.

Keeping these VCOs modules company are two Oktave modules allowing precise transposition of sequences and melodies up and down by four octaves, or precision detuning by +/-7 semitones.

On filtering duties, we have placed our Discrete Core Ladder VCF. If you′re building a classic subtractive monosynth-inspired system, what else to pick but a silky liquid-sounding Moog-inspired filter? This design goes much further, though, offering a unique features such as BOOST, which ensures that there′s no low-frequency loss, even at high resonance settings. Not only that, but all filter pole settings 6dB, 12dB, 18dB, and 24dB/octave have their own individual outputs which can be routed and used simultaneously for some fantastic effects (imagine, for example, an Oberheim Expander filter with Moog characteristics).

Pulling the individual oscillator sounds together is a Gate Mix module. This is our mixer-with-benefits… on steroids… allowing you to combine up to four main sound sources (complete with CV/gate muting) plus an Aux input (which could be anything from a fifth oscillator for power chords to another mixer in your modular set-up). Ideal for uber patches, there′s also the option to simultaneously tap into two groups (inputs 1+2 and 3+4) in addition to the main sum of each, making gate Mix, in addition to many other things, a simple high-quality stereo mixer.

Key to creating great modular patches is the ability to duplicate audio and CV sources for a range of parallel processing, mixing and syncing options. As such, we′ve included two Multi II modules, suitable for everything from precise synchronisation of multiple tone generating VCOs to waveform mixing and subtraction. And the inclusion of two offers up far more potential for combining your System 2 with your other modular gear.

Envelope shaping comes courtesy of an Envelope X3. This module is based on the acclaimed Roland 100M, but vastly enhanced to deliver peerless punch and consistency. It delivers three ADSR envelopes, with potential for lightning-fast response, ideal for drums, bass, and other sounds that benefit from fast and tight envelopes. But that′s not all: Long and Short modes (with overlapping ranges) mean it′s perfectly suited to pads and drones too.

LFO duties are supplied by no less than three of our prized QLFO modules. This design offers unprecedented versatility for an LFO, going far beyond conventional modulation duties, with an extraordinary frequency range from snail-slow to dog-whistle territory.

Four simultaneous outputs per module offer a sine wave and three phase-shifted copies – 90º (cosine), 180º (inverted sine), and 270º (inverted cosine) – allowing a world of fun (more on that here). The frequency of these can then be voltage controlled (with an attenuator at the input), while another CV input then allows the LFO to be pitched by volt/octave, with solid tracking good over 2-3 octaves. But that is not all the QLFO can do, it can even operate as a rudimentary sine wave VCO – and remember… System 2 includes three of them!

In any modular system, VCAs are a fact of life, like shower curtains, bedsheets, and toothbrushes. But – like shower curtains, bedsheets, and toothbrushes – that doesn′t mean they can′t do a great job, look sexy and generally be a joy to use! We like to think our VC Dual Amp modules fit the bill, and so we′ve added two of them, offering up a total of four VCAs.These linear VCAs all feature unrivalled accuracy and precision, as their unique design ignores conventional designs and is based instead on circuits found in precise measuring devices, such as oscilloscopes. They also offer an uncommon level of creativity thanks to the ability to handle both audio and control signals, and with innovative features like a summed output for each pair – alongside the individual outputs – and an Aux input, enabling a range of fun effects such as modulated stereo panning and crossfading.

On the road again?

Whatever kind of noises you make with a modular set-up, at some stage you′ll want to take that audio out into the world, and our Audio Interface is the answer. Whether you want an unbeatable signal path from modular system to studio (and vice versa), or to take it on stage and combine it with other equipment (without needing an additional mixer), it delivers. The combination of a studio quality signal path, flexible routing possibilities, and a headphone amplifier – capable of driving both high and low impedance headphones, with low distortion – makes the connection between these different environments effortless and sonically transparent.

All of this is contained in an 84HP EVZ-1 case, our lightweight, high-end Eurorack cabinet. Precision crafted from

Finally, System 2 ships with an AC adapter, and 20 patch cables, so it′s ready to use, right out of the box.