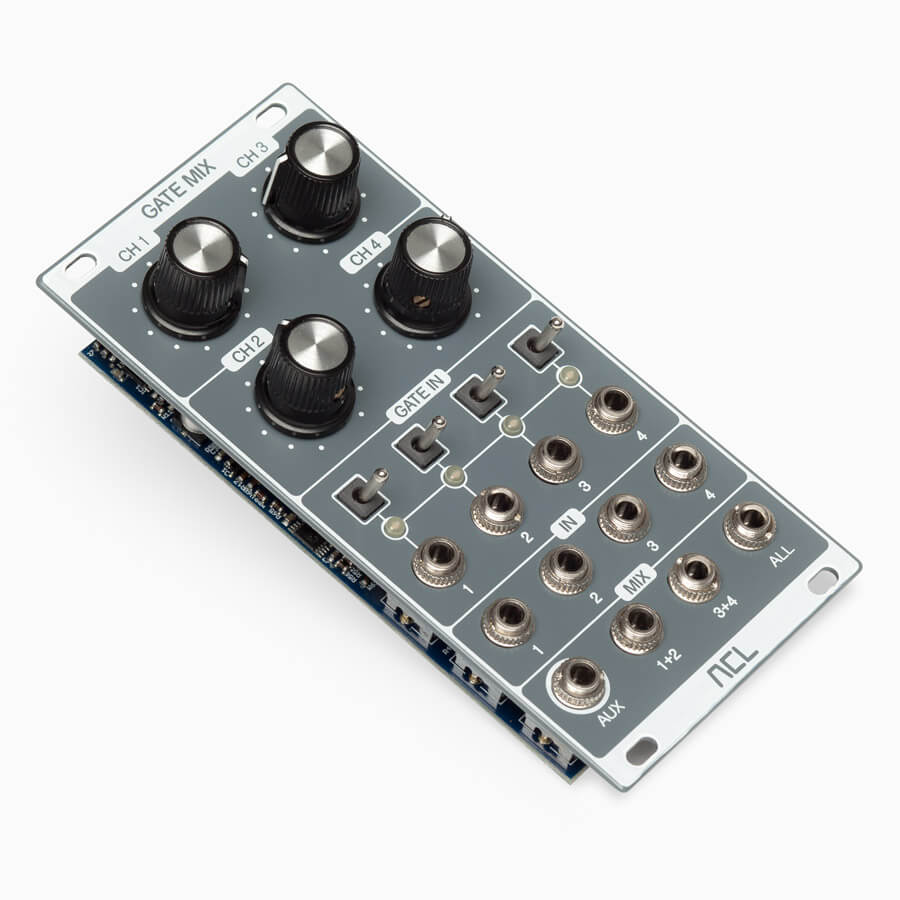 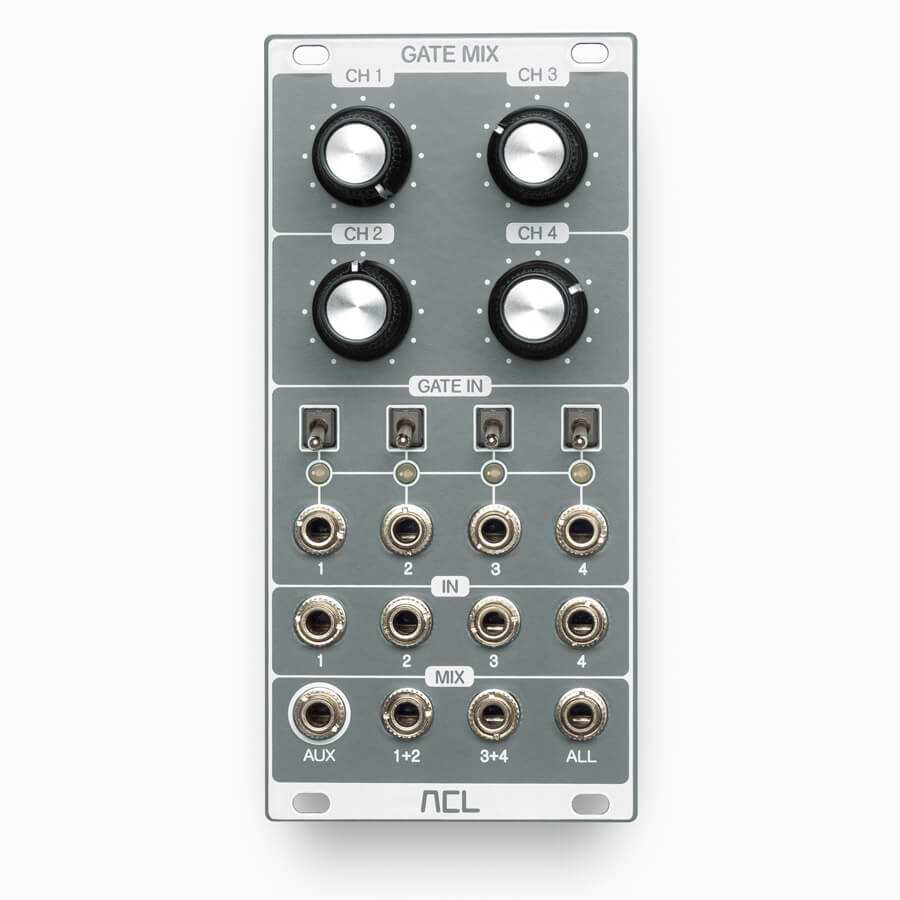 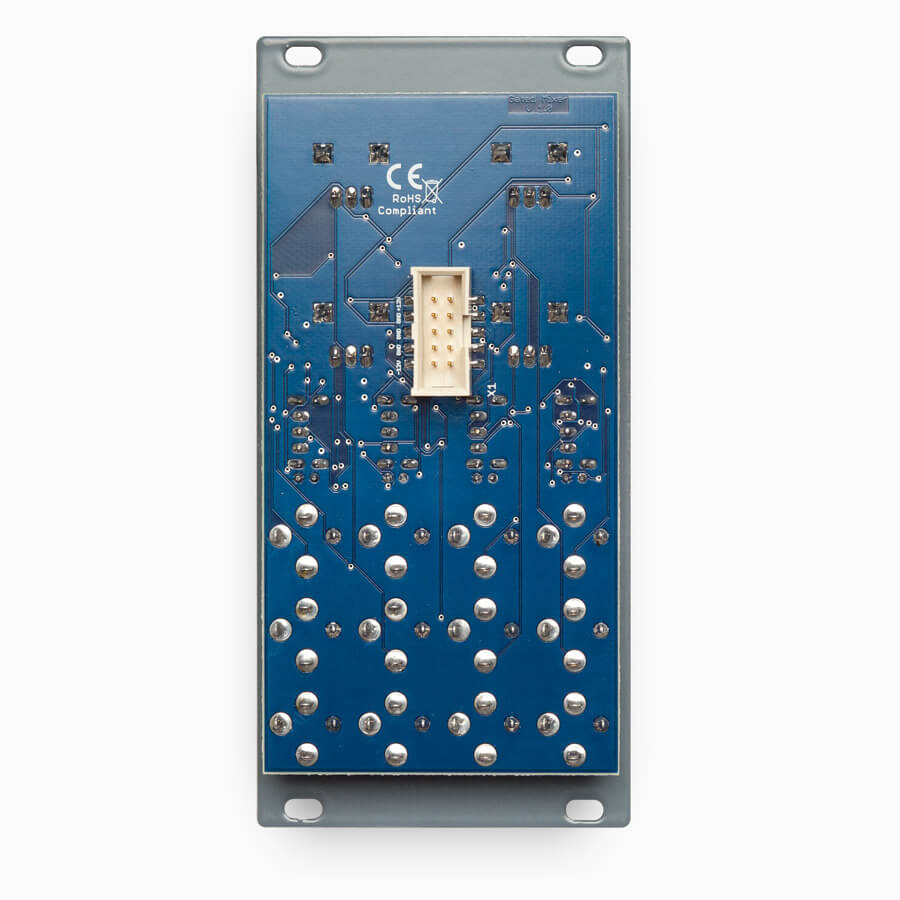 Our Gate Mix is a high quality four audio signal mixer with CV/Gate muting, ideal for stacking up super uber patches, cascading other mixers, and, you won't be astonished to read, much much more! A mixer with benefits, you might say. But first let's follow some audio signals through to see how everything flows.

Incoming audio is received via four mono inputs, each of which can be switched on and off manually, or by a CV or gate signal. And because the only thing nature loves more than well specified equipment is childish humor, we made sure each input also has its own large knob (an attenuator, to be precise).

Next, these four inputs are summed into two grouped pairs (1+2 and 3+4), each representing the sum of, you guessed it, inputs 1+2 and 3+4. These two groups are then further mixed into the main mono output signal.

Individual outputs are provided for both of the groups and the main output, all of which sit to the right of an auxiliary input. This simple but elegant configuration allows a number of possibilities, such as sending a signal from the groups to an external effects device and then using the AUX input for the effects return. Or the AUX may be used to receive the signal from another mixer, allowing you to cascade as many as you like. Or you might just want a fifth input for emergencies. And those subgroup outputs also mean it can even operate as a simple but high quality two stereo channel mixer: Channel One's left and right would go into inputs 1 and 3, Channel Two's left and right to inputs 2 and 4, and the sub groups would thus provide the mixed stereo output (1+2 = left, 3+4 = right).

The sound quality throughout Gate Mix is, as with all of our equipment, second to none, and great attention was paid to the switches. Thanks to slew-ramping (essentially a very fast fade in/out), switching a channel on or off (whether with the manual switch or with CV/gate) will never result in unpleasant clicks, allowing real time modulated gating fun - anything from simply switching channels on or off to avoid unwanted noise in quiet sections, right up to full-on choppy gating. Furthermore, the muting can be set to be triggered by high control signals or low control signals for added flexibility. Finally, LEDs for each channel let you know when audio is able to pass through.

We've already given some practical use examples, so rest assured, we won't patronise you by listing all the other cool and useful things our Gate Mix mixer brings to your modular system. That said, stacking up monophonic VCOs to create up to five note polyphony, or summing percussion and bass modules, would not be out of place on such a list! Okay, sorry, we won't list any more...