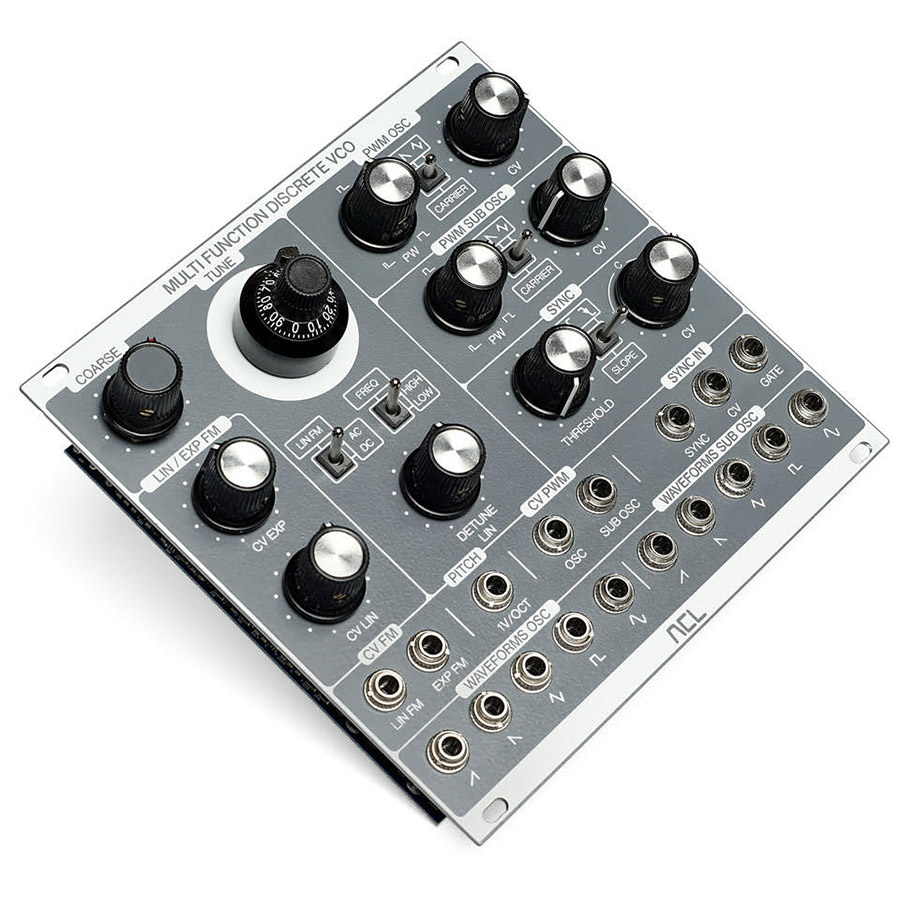 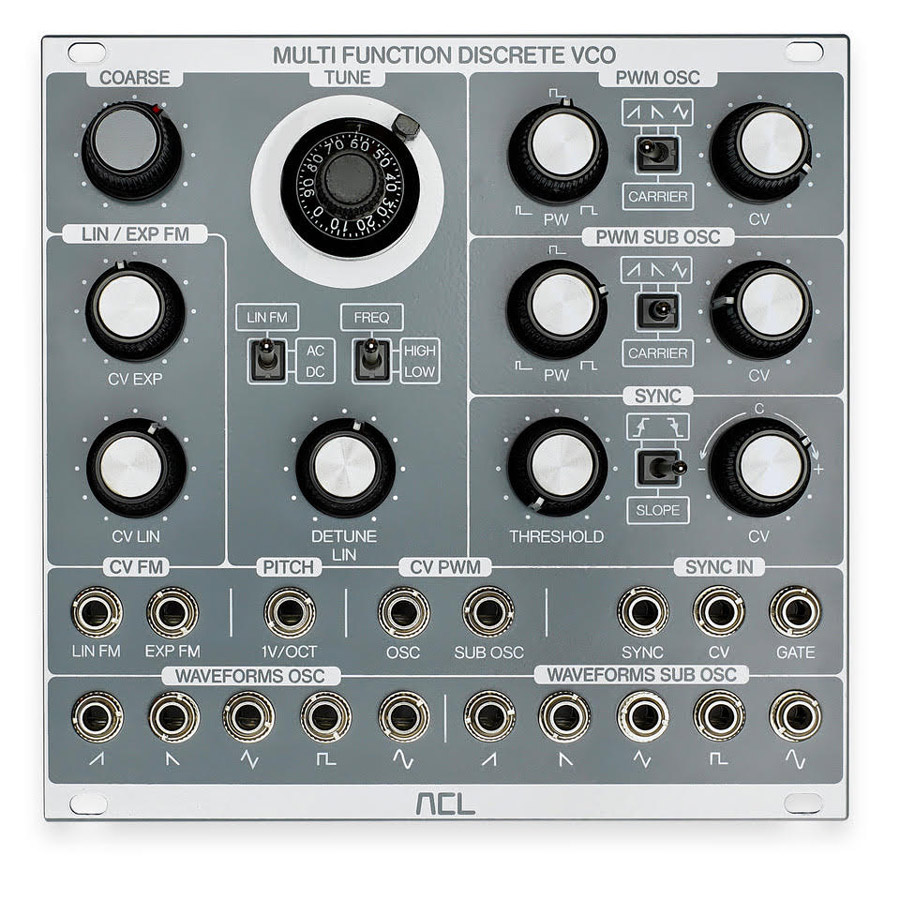 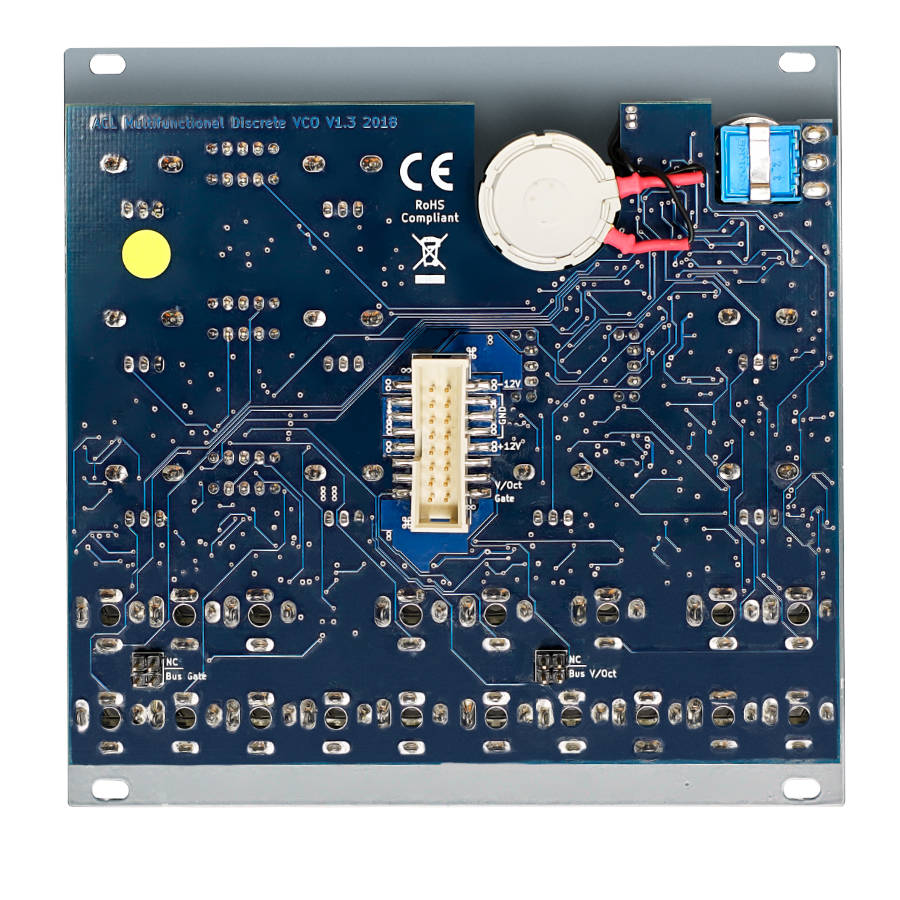 The Multifunction Discrete VCO rips up the rulebook to deliver a unique and powerful sound. Its completely new multi-waveform and syncable sub-oscillator design provides super-phat layered sounds and de-tuned voices.

We are proud to present one of our most original modules yet. Designing a module can be like starting a track – you might have something specific in mind, but before you know it you have made something entirely new, with no connection to the original idea.

And that′s pretty much how we came up with the Multifunction Discrete VCO: we set out to emulate a classic VCO, began experimenting, followed our noses, and ended up making something completely different.

And, we think, better!

At its core, the Multifunction Discrete VCO combines a massive single sawtooth core with a strong sub oscillator, both with individual waveshapers. This sub oscillator is, to the best of our knowledge, unique, as it′s not a separate oscillator, but rather a frequency divider (always one octave down).

There′s much more to it than that, though: separate outputs provide simultaneous access to all the resulting waveforms – saw, inverted saw, PW rectangle, triangle, and sine – for both the oscillator and sub oscillator. So you can mix and match any combination, or all of them, simultaneously!

Naturally, we spared no effort or expense to bring you the finest quality components, from the inside to the outside, with the rugged build you′d expect from a tank… or an ACL module! All signal paths are fully discrete, right up to the outputs.

But as we claimed from the outset, this is much more than a mere classic VCO.

Beating and detuning and syncing… oh my!

For example, if you play with the linear detune, it′s possible to create awesome ‘beating’ effects when layering two or more VCOs. In conventional designs, the beating will speed up or slow down according to pitch, but in our design the beating remains the same, even when playing the sound across many octaves.

In other words, this direct relation between the linear detune and VCO response makes it possible to have the same beating frequency at every pitch, for a uniquely atmospheric, rich, and alive sound.

Moreover, if you play the VCO in LFO mode, the module enables control of the speed in the same way as in VCO mode, even allowing very long lasting sweeps.

Another strong feature is the huge range of syncing capabilities: adjust the sync amount manually, or use CV to glide from no sync to sync, surfing through variable degrees of soft to hard sync.

The core can sync to all repeatable waveforms that approximately exceed 1 VPP, and you can choose between falling and rising edge sync, to hold the proper phase relationship between the syncing and the synced wave or generate phase offset of 180 degrees.

For more percussive and bass patches, the Gate input can be used to reset the VCO core at the beginning of every note, ensuring every attack sounds equal and systematic at each time the notes are played. The Gate input can also be used as hard-sync input as well, even at the same time as the Sync input.

There are also powerful sound-shaping modulation options. For example, you can also modulate both the oscillator and sub oscillator rectangle wave pulse widths through their separate PWM inputs and controls. On top of this, you also have the possibility to choose between different PWM "carrier" waves to change the PWM-behaviour: Rising and Falling Sawtooth will create a heavily detuned unsymmetrical PWM sound, while Triangle will create a very musical sounding symmetrical PWM.

We′ve just scratched the surface of this imaginative module. We followed our instincts when designing it, and that′s exactly what you will do when using it too. Sounds speak louder than words, so we invite you to try it out for yourself or check out the demo below.