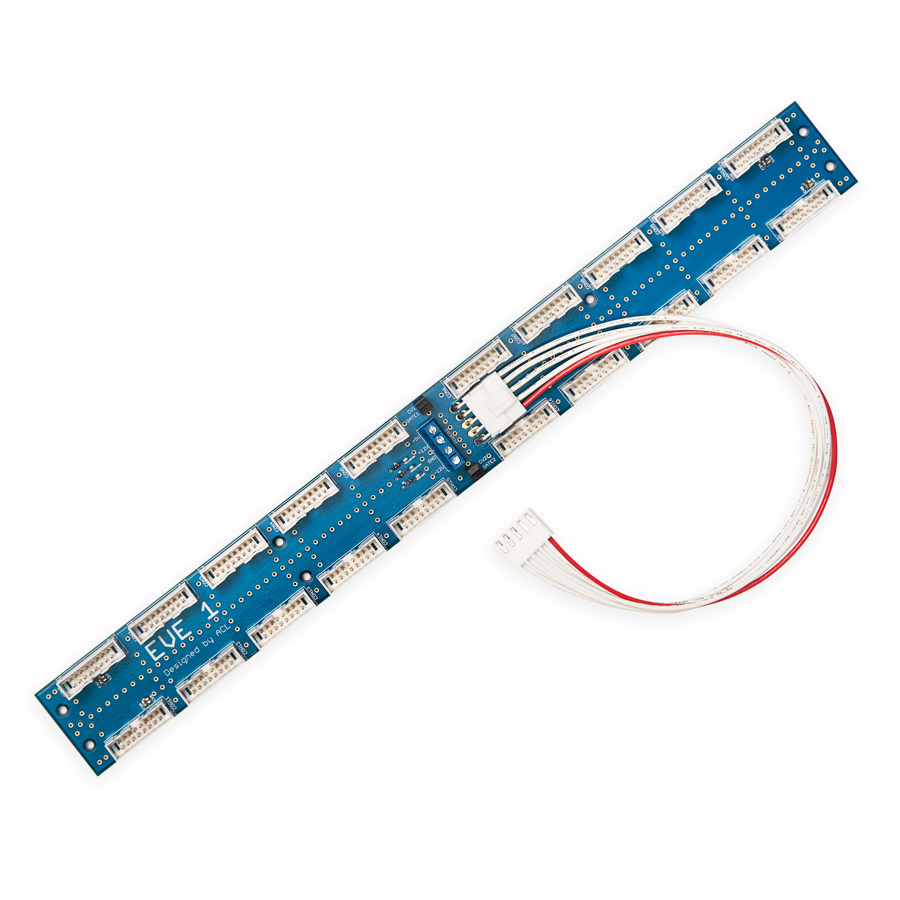 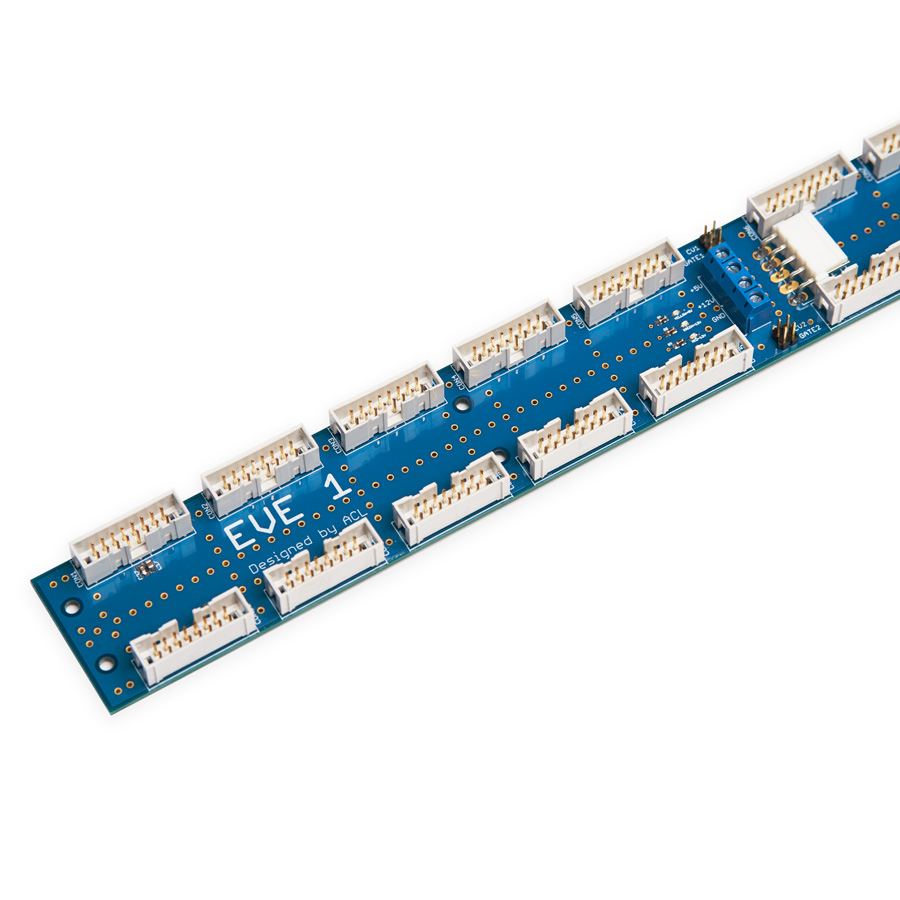 The ACL EVE 1 busboard is used to distribute the operating voltages of a power supply unit to up to 20 modules in a Eurorack case.

It was developed with the aim of achieving the lowest possible electrical contact resistances between the power supply and the modules. This is reflected in minimal electrical potential differences between the power supply unit and between all connection terminals of the modules and the terminals, which almost completely eliminates any couplings between modules and the resulting interference.

This is achieved by a six-layer sandwich design in which each voltage supplied by the power supply unit has its own complete layer for distribution to the module connection terminals, i.e. +12V, -12V and +5V each have the complete surface of the bus board available as copper surface, while the ground rail even has three layers available, resulting in an extremely low electrical resistance of the ground bar (electrical ground).

The arrangement of the layers resembles a sandwich, there is almost no influence between e.g. the +5V rail, on which often disturbing digital modules are connected, and ground or the +/- 12V rails. In addition, there are four buffer capacitors with 22uF and 100nF - each for the +12V and -12V rail, which are arranged as parallel connected packets with 22uF and 100nF each at the outer ends on the board on the left and right. These capacitors are Ultra Low ESR MLCC types.

Furthermore, a CV and a gate bus are available up to four times (two at the top and two at the bottom, each bridged by a jumper). These are consequently shielded from each other and from the voltage bars and thus cannot influence each other or other voltage bars (+/- 12V, +5V) by crosstalk, which further rounds off the "low-noise design".

The spatial arrangement of the module connection terminals is designed in two lines with ten terminals, each protected against polarity reversal. This arrangement makes the busboard ideal for supplying two module rows, and so the ACL EVE 1 busboard could be seen as two busboards in one.

This enables almost absolutely identical power supply conditions for all connected modules with only one power supply unit and no multiple bus boards connected to each other by cable, and thus represents the electrically optimal solution.

If a single ACL EVE 1 busboard is not sufficient to supply all modules, e.g. for larger cases, several busboards can be connected in parallel.

For this purpose, there are two power terminals connected in parallel on the board, both of which are arranged in the middle and have different designs. One connector (5-pin) is ideally suited for use with the ACL KAZU PSU module, but another ACL EVE 1 busboard can also be connected here. When using power supplies with another power terminal such as the ACL Bar PSU / ACL PSU-BG,the second power terminal, which has screw terminals for the supply voltages, can then be conveniently used. Due to the central arrangement of both power terminals, maximum interference immunity is also guaranteed here due to the highly approximate star distribution of the supply voltages.

This gives the user maximum flexibility without compromising the electrical characteristics of the bus board and is generally free in the choice of the power supply to be used. To take full advantage of the ACL EVE 1 busboard, however, we strongly recommend the use of a power supply with low-noise/low-ripple characteristics such as the ACL KAZU PSU or the ACL Bar PSU / ACL-PSU-BG.